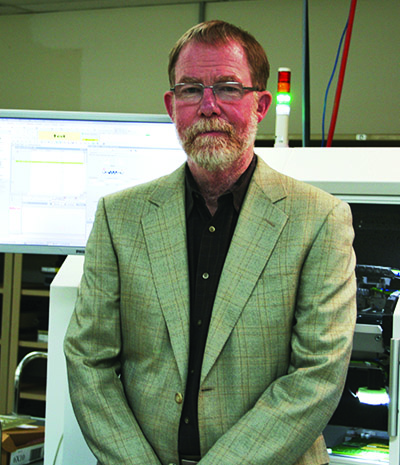 Congratulations on 30 years in the industry, what major changes have you seen in electronics manufacturing in that period, both in technology and geography?

Thank you. In terms of technology, what has been striking has been the relentless emphasis over most of those 30 years on speed and miniaturization, both of which create unique challenges for us as test engineers to overcome. The computing power that once occupied entire floors of buildings now sits comfortably in the palm of your hand. Information moves instantaneously worldwide at the push of a button, meaning secrets are not kept secret for long. All of which has profound implications for how we perform our jobs as test engineers.

Geographically, the obvious answer is the movement of large swathes of North American manufacturing activity overseas, most notably to Asia generally and China specifically. Equally notable in recent years has been the return of some of that manufacturing to America, as OEMs have come to realize, often the hard way, that China is not a manufacturing panacea, especially when problems of design and quality arise and need to be solved quickly.

What has that meant in terms of the demands and the way your equipment is used?

In simple terms, it means investment in new equipment, new technologies, and new skills to stay relevant and competitive.

You cannot underestimate the need for skills. If we want to make stuff, we need to test stuff, and in order to test stuff, we need skilled test engineers, who are not born, but need to be made. Where do you find them in an era when new graduates are more interested in designing killer apps than infrastructure.

You also cannot underestimate the need for new technology to address speed and access challenges. In some cases this means going outside of our basic comfort zone to learn new tools. For example, Datest started in 1984 as a GenRad/Zehntel ICT programming house. Today we offer multiple ICT platforms but also many capabilities we could not have contemplated 30 years ago: These include flying probe programming and test; boundary scan programming and testing; functional testing and test development; automatic X-ray inspection; PCBA failure analysis and bonepile rehabilitation; 3D X-ray and CT-scan failure analysis; and counterfeit component detection. In the coming year we expect to add additional capabilities to our repertoire as our customer’s needs grow and diversify.

How has your company changed in that time, and what core elements of your strategy have been constant?

We were once exclusively an in-circuit testing-oriented company. Now we are much more than that, as you can see from the details previously provided.

In terms of constants, what is worth preserving to do a solid, competent job, at a fair price, on time, using appropriate technology, tools, and skills to deliver value to the customer. This is a constant for us because as a test engineering company we do daily battle with the perception by some that test adds no value. Tell that to the manufacturing engineer whose failing $10K video processor card we successfully troubleshot, reworked and restored to service; or to the development engineer whose project we shepherded through rapid prototype test engineering to guarantee an on-time launch; or to the medical device engineer whose failed board we were able to isolate root cause to fraudulently labeled oscillators.

We also consider ourselves to be honest people. Sometimes being honest means telling the customer the truth rather than what he or she wants to hear but we are in it for the long haul rather than for the immediate sale. Value tends to win out and be clearly recognized over the long term, critics of the non-value-added nature of testing notwithstanding. Sometimes the truth protects the customer from calamitous decisions. We do our best to steer the customer in the direction of their best interests, however imperceptible they may be at times. Our best customers, some of whom have been here for most of our 30 years, recognize this.

What new challenges do see coming from some of the new technology entering the marketplace?

More of the same: More features, more speed, more packed into the same small cubic space. All of which demands constant adaptability on our part. That is nothing new. We have adapted many times in 30 years. I expect we will be doing more adapting in the years ahead.

Where is your footprint likely to develop in the coming few years?

Unfortunately my crystal ball is in the shop this week, but I will hazard a guess and say that five years from now we will be doing amazing things we can barely conceive of today. Hopefully we also will still be having fun doing them, and delivering new value to our valued customers.